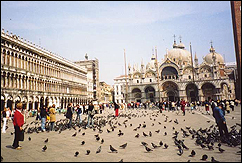 VENICE (CelebrityAccess MediaWire) — Plans to stage two Elton John concerts in the historic St. Mark’s Square in Venice, Italy, have been criticized as “irresponsible” amid fears that the city’s monuments could be damaged.

The concerts, scheduled for June 5 and 6, are part of Elton’s “Red Piano” tour, which also stops at the Palace of Versailles and Berlin’s Brandenburg Gate.

A spokesman for the Venice’s town council said there remained “obstacles” and no final deal had been confirmed.

“We have to take into account the monuments of the city. The concert, just like any other event in St. Mark’s Square, has to be organized according to the requirements of the council and the regional authority,” the spokesman told the Daily Telegraph.

Critics fear a repeat of Pink Floyd’s 1989 concert, which attracted 200,000 people to the area, leaving a mess that took the city three days to clean up. –by CelebrityAccess Staff Writers