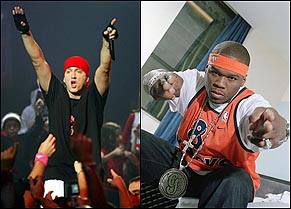 (CelebrityAccess MediaWire) — The third installment of the Anger Management tour will be on the road beginning July 7 in Indianapolis, IN and winding down August 13 in Detroit, MI. Joining Eminem on tour for all but the first two dates is 50 Cent–the first U.S. tour that pairs Eminem with partner in rhyme 50 Cent. Like Eminem and his Shady Records family, this will be a family affair for 50, with G-Unit joining him on the road. 50 Cent is just beginning to shoot his film debut, and due to the movie's production schedule, he will be unable to appear at the first two dates. Ludacris will be taking his slot for those shows. King of Crunk Lil Jon along with his East Side Boyz will open for the entire tour.

"We've been waiting for the right moment to go on tour, and it all finally came together," said Eminem. "We wanted to put together the best lineup we could … I'm always trying to top the last tour whenever I go out. I think we're really doing it this time."

Eminem's entire Shady Records family will be on the road with him for the five and a half week run, including D-12, Obie Trice, and the newest addition to the family, Atlanta's Stat Quo, who recently signed to Shady/Aftermath. Shady mixtape king Green Lantern will, as usual, be behind the turntables.

"Whenever I get together with Em you know it's going to be hot," said 50 Cent. Right now, I don't see anything that will stop this from being the tour of the summer. You better put in for that time off from the job now, before somebody else beats you to it. Or quit your job so you can see every show."