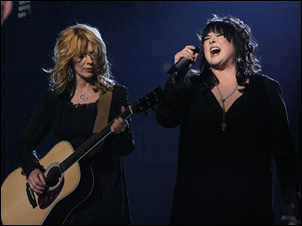 LOS ANGELES (CelebrityAccess MediaWire) — Ann and Nancy Wilson, sisters and lead singers of the band Heart, have sent Sarah Palin a "cease-and-desist" letter for her use of their 1970’s hit “Barracuda.”

Palin used the song at the Republican National Convention to drive home her self revived high school basketball nickname of “Sarah Barracuda.”

"The Republican campaign did not ask for permission to use the song, nor would they have been granted that permission," according to a statement made by the Wilson sisters.

The McCain campaign responded with their own statement declaring they obtained all the necessary licenses to use the unofficial theme song after the vice presidential nominee’s RNC speech last Wednesday.

"The McCain campaign respects intellectual property rights," spokesman Brian Rogers said. "Accordingly, prior to using “Barracuda” at any events, we paid for and obtained all necessary licenses."

This is not the first time the McCain Campaign has taken a personal hit from the corresponding artist to their song choice on the campaign trail. According to Reuters, Jackson Browne sued Republican presidential candidate John McCain, the Republican National Committee and the Ohio Republican Party, for use of his 1977 chart topper "Running on Empty" in a campaign ad without authorization.

Unfortunately for the Wilson sisters the may have to allow the Republican Party use their song as copyright law is not on their ‘Democratic’ side. ‘Barracuda’ is licensed for public performance under a blanket fee paid by the venue to ASCAP, the firm that collects royalties on behalf of composers and copyright owners.

Regardless of the Wilson sisters' disappointment, one of the song's co-writers said he was "thrilled" that the song was used, according to Reuters.

In an e-mail to Reuters, the band's former guitarist, Roger Fisher, said it was a win-win situation. Heart gets publicity and royalties, while the Republicans benefit from "the ingenious placement of a kick-ass song," Fisher said.

But in a second email to Reuters, Fisher said he strongly endorsed the Democratic ticket, and would donate a portion of royalties he receives from the Republicans' airing of "Barracuda" to the campaign of Sen. Barack Obama.

"With my contribution to Obama's campaign, the Republicans are now supporting Obama," he said. –by CelebrityAccess Staff Writers