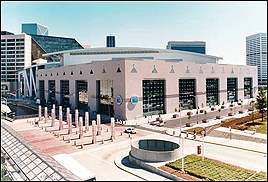 ATLANTA (CelebrityAccess MediaWire) — Philips Arena has promoted long-time executive Trey Feazell to the position of Senior Vice President and General Manager. In his new role as General Manager, Feazell will oversee all day-to-day operations at Philips Arena, as well as its relationship with Levy Restaurants and Ticketmaster.

"Trey’s experience, passion, work ethic and leadership qualities make him immensely qualified for this position," said Philips Arena President, and Atlanta Spirit Executive Vice President Bob Williams.00 "His contributions over the last decade have been instrumental in establishing Philips Arena as one of the most successful arenas in the world and I have full confidence that he will excel in this increased role."

Feazell began his career at the Omni Coliseum in 1987 in building operations prior to being named Director of Bookings in 1996, the title he held when Philips Arena opened in 1999. From 2006 to the present, Feazell has served as Philips Arena’s Senior Vice President in charge of arena marketing, bookings, business development and box office services. During his tenure with the building, Philips Arena has garnered consistent top-ten international rankings for concert and event attendance, as well as numerous industry accolades for client service and satisfaction. – Ian Courtney