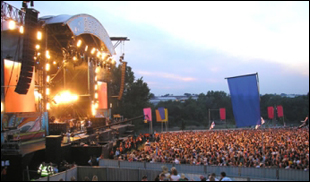 ISLE OF WIGHT (VIP-NEWS) — As the Isle of Wight Festival closes, the council has estimated it is worth £15m to the local economy.


The annual event was restarted at Seaclose Park in Newport in 2001 and has since become one of the biggest festivals in the UK.


About 50,000 people enjoyed the event this weekend with the Pixies and Neil Young headlining on Sunday.


The council said it had helped change the island's image and brought millions into the economy each year.


John Metcalfe, Isle of Wight Council's assistant director for economic development and tourism, said: "The festival is hugely important to the island, especially to Newport.


"We estimate it is worth at least £10m spent in the Newport shops, and that is just from people from off the island visiting for the festival.


"If we put on top of that the money spent by the organizers with island businesses and organizations it is worth at least £15m to the island's economy.


"It is a huge figure and in only eight years the event has changed how people see the island and the impression of the place."


This year's event has seen the likes of The Prodigy, The Stereophonics and Razorlight perform alongside the likes of Simpleminds and Bananarama.


Annie March, manager of outdoor clothing and equipment chain Blacks in Newport, said: "It is a cracking event, it makes a really good atmosphere on the island and it does increase business.


"Loads of people come to the island and forget things like tent pegs.


"You also find a lot of people don't like to bring their equipment and lug it all down here and buy it locally."


Jade Wood, from Oggies cafe in Newport, said: "We've been having more than 200 people coming in.


"We always do well and do great business due to the event."


The council added it was very much behind the event and was set to make a decision in the next few months which would secure the festival at Seaclose Park for the next 10 years. –According to BBC