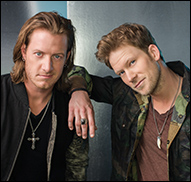 KENOSHA, WI (CelebrityAccess) — Country duo Florida Georgia Line have apologized over controversy caused by their request for there to be no armed police officers backstage at a pair of their shows.

According to Fox News, two separate sheriffs confirmed FLG asked them to not provide officers backstage at Florida Georgia Line's concert and turned down the band's request for a police escort after the show.

The band released a subsequent statement, clarifying their request and noting that it was not because they had anything against police, but felt that the security would be redundant due to their existing security arrangements.

You won't find two guys who are more supportive of the police than we are. What happened over the weekend was a misunderstanding that was blown out of proportion and taken out of context. There is nothing more to this story beyond our team feeling that it would be redundant for us to use local authorities when we are already covered. Our management is routinely asked if they need help from local law enforcement for additional security backstage at concerts, which is common among touring acts. Some acts accept the offer, but most don't because they have their own security, or the promoters provide it. We have an enormous amount of respect for the brave men and women who protect our communities and allow us and our fans to have a good time at our shows. Nothing is more important than our fans’ safety. We are lovers of all people, and want to be a part of the change that is needed right now. We encourage everyone to do the same. Let's love one another.

The band also reached out to the sheriffs to apologize.

"I had a surprise phone call from Brian Kelley [of Florida Georgia Line]", Kenosha County Sheriff David Beth told FOX411 Country. "[Kelley] was extremely apologetic and said it was a misunderstanding. He said he's got family and friends in law enforcement…he also talked to [his] manager and told them to change the wording they've used about [police backstage] that's been the same thing they've used for the past four-and-a-half years." – Staff Writers