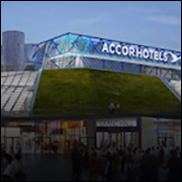 PARIS, France (VIP NEWS) — Paris’ 20,000-capacity arena formerly known as Bercy Arena is to be renamed AccorHotels Arena in the first naming rights agreement for a venue in France.


The venue is owned by the city of Paris and operated by a management company in which AEG and the city are partners. It will open its doors later this month following an 18-month, €140 million refurbishment resulting in an increased capacity and upgraded facilities.


“AccorHotels have seen how beneficial the naming rights model can be for brands such as O2 and Barclaycard," said Paul Samuels EVP of AEG Global Partnerships, which negotiated the 10-year deal. "By acquiring the rights to the upgraded and renovated arena, the brand will connect with music, sport and entertainment fans in a new and exciting way, a first for the French market and a hotel chain. We’re excited for what this partnership can do for the venue and AccorHotels customers.”


As part of the deal, AccorHotels will have the ability to provide benefits to their card holders including priority ticketing, fast-lane entrance to the venue as well as access to exclusive lounges and suites. AccorHotels will also receive exclusive opportunities including the ability to deploy of a wide array of digital activations through the venue’s Wi-Fi facilities.


The venue, which features 30 different seating configurations ranging from 8,000-20,300 seats, host more than 120 events annually, with upcoming concerts including U2 and Foo Fighters.