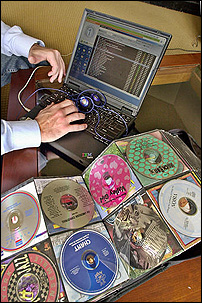 A new consumer survey has revealed for the first time the extent of music
downloading in the UK. Key findings include:

* Around 5 million people in the UK download music from the internet;

* On average they are downloading 19 tracks each per month;

* This equates to over 1 billion tracks downloaded in the UK alone per year;

* Nearly two-thirds of downloaders burn music on to CDs, creating an average
of 4.2 CDs each per month; and

* This suggests that around 2.5 million people in the UK are burning around 126 million CDs per year.


The survey, based on samples of 1,440 internet users and 1,000 downloaders,
was commissioned by the BPI, which represents UK record companies, and
conducted in association with the British Videogram Association and the Film
Distributors' Association. It is the most extensive such survey yet
compiled.

BPI executive chairman Peter Jamieson says, "This survey provides a unique
insight into the greatest growth opportunity for the music industry since
the launch of the compact disc. It reflects the public's growing appetite for music and shows the huge
potential for emerging legal download sites. The music industry is investing
a massive amount in new music technologies in order to deliver legal and
safe download services to the consumer. This survey indicates these services
will find a willing public."

Jamieson points out that the survey also highlights some of the challenges
facing the UK recording industry. "The reality is that although this survey measures usage of all music
download services – paid-for, free record company sites and illegal sites –
the bulk of current downloading activity is illegal," he says. "We estimate that in the UK alone there are 2.5 million users of illegal
peer-to-peer downloading sites. We call upon the government to give us the
protection we need to deal with such theft, and to protect the livelihoods
of the hundreds of thousands of people – artists, songwriters and workers in
the music industry – who are threatened by such abuse of the internet."

"The history of the record industry has shown time and again that technology
is the friend and not the enemy of music. From the wax disc to the latest
audio formats, technology has increased people's appetite for music. The
internet is no different and legal online services herald a new era of
growth for the music business."