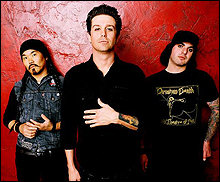 "I am at a complete loss for words," said Russo "My entire family is now homeless, all our pets are gone and our earthly possessions have been lost. In these tough times, my family had been out of work and the financial burden was too heavy for me to afford fire insurance. The support from my friends has been overwhelming."

Fortunately, Scott has some good friends, including his Unwritten Law bandmates, Jason Mraz, Timmy Curran and the members of Switchfoot along with a host of local bands. Scotts friends have gathered together to stage a benefit concert for the Russo family at the HoB on Tuesday night at he House of Blues.

Tickets for the event can be had from our friends at Ticketmaster and at the HoB box office and will set you back $45 for general admission and $100 shekels for the balcony seat. All of the proceeds from ticket sales and any donations you care to make will go to the Russo Family. – CelebrityAccess Staff Writers