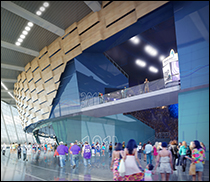 VIRGINIA BEACH (CelebrityAccess) — The Mayor of Virginia Beach announced that the city and the prospective developer have finalized plans to move forward with a new arena in the city.

The agreement with United States Management follows months of uncertainty about the deal, which has been in the works for more than three years with little signs of progress.

The agreement calls for the city to contribute $67 million in infrastructure improvements to the project, as well as lease land for the new 18,000-capacity sports and entertainment facility. The total cost of $220 million would be privately financed, the Virgninian-Pilot reported.

The developer hopes to break ground this summer and to open the arena in 2019.

“So we’re very happy the council has embraced what we think is a great financing plan for the arena,” USM President and CEO Andrea Kilmer told the Virgninian-Pilot. – Staff Writers