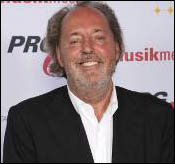 Together with his wife Jutta Schremmer-Rieger, Peter Rieger founded the Peter Rieger Konzertagentur (PRK) in Cologne in 1983.

Since 1975 he has been organizing concert tours with German artists, including BAP. Rieger also worked for Lippmann & Rau, the largest event agency at that time. He later co-operated with the concert organizer Marcel Avram.

At the initiative of Rieger, the American artist Barbra Streisand, who had always refused to play in Germany as a Jewess, appeared at the Berlin Waldbühne. At the invitation of the member of the SED Central Committee, who was then responsible for the youth, and then to the Council of State Councilors, Egon Krenz, he organized the "Concert for Peace" in East Berlin with James Brown and Joe Cocker in 1988.

In 1987 Rieger, together with Ernst-Ludwig Hartz in Berlin and at Loreley (St. Goarshausen), started the Bizarre Festival, which developed over the years into a two-day event.

On July 21, 1990, Rieger's agency made the Rockoper "The Wall" with Roger Waters on the site of today`s Potsdamer Platz, then still Niemandsland, which was searched for mines before the construction of the 170-meter-wide stage. The concert took place both in West Berlin and in the East Berlin sector. Peter Rieger recorded the musical Tommy from The Who in Germany in April 1995.

In July 2000 Rieger, together with the Marek Lieberberg Konzertagentur and others, entered into a strategic partnership with CTS Eventim AG, which took over 70 percent of PRK.

Rieger organized open-air concerts for classical music with the Three Tenors. Luciano Pavarotti, the operatic star, performed for the first time in front of about 21,000 spectators at the Berlin Waldbühne. For Pavarotti Rieger organized Europe-wide tours, including performances at the Red Square in Moscow and the Eiffel Tower in Paris.

At the end of the year 2015 Rieger gave up his position as Managing Director of Peter Rieger Konzertagentur, but remained an advisory partner of the company.