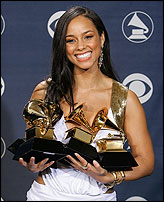 NEW YORK (AP) — From J.Lo to James Brown, Usher to U2, the Grammys had it all this year – except a lot of interested viewers. An estimated 18.8 million people watched Ray Charles' swan song clean up with eight awards Sunday night, a startling 28 percent drop from the 2004 Grammys.

After two years on an upswing, Grammy ratings sunk to their lowest level since 1995, according to Nielsen Media Research. It may be an ominous sign for the granddaddy of awards shows, the Academy Awards, Feb. 27 on ABC.

People at CBS and elsewhere in the industry were somewhat perplexed by the numbers on Monday, given that the show was jam-packed with performances and star power.

"This was the show to beat in terms of how it was produced," said Shari Anne Brill, a television analyst for Carat USA. "It was just great. It wasn't about someone handing out awards. It was about performances. Viewers who didn't tune in missed a treat."

The Grammys, which has a long history of being derided as the Grannies within the music industry, even drew an endorsement from one of pop's potentates. "I think this is the best Grammys we've ever seen," U2 lead singer Bono said as the group accepted an award toward the show's end.

It was a continuation of a recent Grammy trend of minimizing awards presentations and maximizing live performances.

While there were misfires – the cacophonous opening number where several acts briefly played different songs all at once – there were plenty of thrills. Alicia Keys' smoldering "If I Ain't Got You," Kanye West's resurrection, the duet between Usher and Brown and songs by Green Day and U2 all come to mind.

Brill agreed: "Don't you think if Michael Jackson did a duet with someone with his trial going on, more viewers would have come?"

Charles' big win could have been a hindrance, too. While a music legend, his best work may have been a mystery to many young viewers. Since he died last June, viewers were denied heartwarming scenes of him basking in the glory.

It continues a trend of less-than-stellar ratings for awards shows.

The Emmys last fall had its smallest audience ever. The Golden Globes last month had its fewest viewers since returning to broadcast television in 1996, down a whopping 10 million people from 2004. The 12.9 million people who watched the American Music Awards in November was a distant echo of the 48 million who tuned in two decades ago.

"I'm wondering if there are so many awards shows that they have lost some of their specialness," Brill said.

The Academy Awards, frequently the year's second-highest-rated entertainment event after the Super Bowl, usually considers itself immune from such outside factors. But big-box office films tend to juice the ratings – the Oscars haven't approached the 55 million who watched when "Titanic" won in 1998 – and this year has no dominant film.

Host Chris Rock may draw in the curious, particularly with his unique brand of promotion. The Internet's Drudge Report on Monday was circulating excerpts from a recent Entertainment Weekly interview where Rock said, "What straight black man sits there and watches the Oscars? Show me one!"

ABC has been more aggressive promoting an event that usually sells itself.