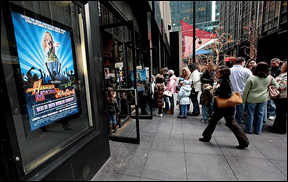 NEW YORK (AP) — Hurry, hurry, hurry! The movie event of the year! One week only!

It's one of the oldest tricks in the marketing book — the limited-time offer — and The Walt Disney Co. worked it to perfection last weekend when tweens spent $31.3 million to see the studio's latest hit, "Hannah Montana & Miley Cyrus: Best of Both Worlds Concert."

But now that the 3-D film's run has been extended, were parents duped into rushing their kids to the theater? Or was it just another case of Disney's marketing mastery?

"When you create that kind of buzz and combine it with scarcity, you're going to drive up demand," Smith said. "The model strikes me as not much different from a rock concert."

As most media companies are ceding control of when and where consumers can watch shows or listen to music, Disney is managing its content as tightly as ever. And based on the movie's results — the "Hannah Montana" film set a record for any movie opening on a Super Bowl weekend — people are falling over themselves to keep Disney's schedule.

"When you have a successful franchise, setting the time table and controlling the distribution just develops an appetite for more," said Michael Kupinski, media analyst and head of research at Noble Financial Group. "No one is as good at this as Disney."

The company rode the strength of its "Pirates of the Caribbean," "High School Musical" and "Hannah Montana" franchises to a 9 percent increase in fourth-quarter revenue and better-than-expected earnings.

Disney says it planned all along for a one-week run for the "Hannah Montana" film, envisioning it as an extension of the wildly popular concert tour that played to sold-out arenas across the country last year.

Disney has also used limited-time offers to sell anniversary or special versions of its iconic animated movies, from Snow White to Pinocchio, and has changed the terms to meet demand.

The studio extended the "Hannah Montana" run on Saturday, giving theater operators the option to show the film for as long as they like. Disney said it responded to "astounding" demand on the opening weekend.

But the company also knew long ago the movie would be a smashing success.

Advance ticket sales were higher than for any movie that was not a sequel, and the fifth-highest ever, according to online ticket seller Fandango. In fact, it has been the top-selling movie at the service since the tickets went on sale Dec. 1.

Fandango alone sold more than $9 million in advance tickets for the weekend shows of "Hannah Montana," nearly a third of the total box office. Disney says it told theater operators well in advance the company would extend the run if demand was high.

The company says it wasn't trying to manufacture scarcity to drum up demand.

"We were trying to make it like an event, like a concert," said Mark Zoradi, president of Walt Disney Studios, Motion Picture Group.

"If we were trying to make it scarce we would have had a more limited release," he said.

The movie ran on all of the country's 683 public screens equipped to handle 3D films, and averaged $45,534 per screen over the weekend. A typical blockbuster opens in 3,000 theaters and averages about $7,000 at each, according to industry statistics.

Most movies are released as broadly as possible, Smith said: "You want a large number of people to see it quickly just in case it doesn't fly."

A trend that has alarmed studios is huge opening weekends that fade quickly after a blast of negative word of mouth. That makes the first weekend even more important, Smith said.

"By limiting the run, you can eliminate the effects of bad press by forcing anyone who's interested to see the movie right away," he said.

Apparently Disney won't need to worry about an abrupt falloff in ticket sales. "Hannah Montana" received an "A" grade from moviegoers polled by CinemaScore, and Fandango said advance sales remain strong for the movie into next week.