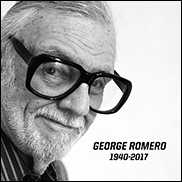 LOS ANGELES (CelebrityAccess) — George Romero, a director, and author whose horror films such as "Night of the Living Dead" became cult classics and launched the modern zombie genre, died on Sunday. He was 77.

According to the Los Angeles Times, a family statement provided to the newspaper said that Romero died in his sleep after a “brief but aggressive battle with lung cancer,”

Romero is best known for the cult classic "Night of the Living Dead" which he co-wrote with John A. Russo. The film, which was panned by the critical press, proved to be a box office smash with horror fans and after grossing more than 50 million, would go on to become one of the top grossing indie films of all time. As well, the film spawned numerous sequels and helped to launch the zombie subgenre which still exists today on television such as the hit FX series "The Walking Dead" and movies such as "Day Z."

While many critics took issue with the violence in "Night of.." and its sequels, observers have also noted Romero's willingness to address surprisingly deep issues such as race and socioeconomics. The original "Night of the Living Dead" made in 1968, cast African-American actor Duane Jones in the lead role as the hero of the film amidst an otherwise white cast, a first for horror movies.

In the sequel "Dawn of the Living Dead," Romero uses the film's primary setting in a large shopping mall to poke at what Romero saw as the mindless press of American consumerism, with the living dead returning swarming to shopping malls by mere force of habit from their previous lives.

“I always used the zombie as a character for satire or a political criticism, and I find that missing in what’s happening now,” Romero said in 2013 interview.

In addition to the spate of zombie movies, Romero also had a hand in numerous other horror projects, including other cult classics such as "Creepshow" as well as acting roles in major box office hits such as "Silence of the Lambs."

Romero is survived by his wife, his daughter, his son Andrew Romero and, from his earlier marriage to Christine Romero, his son Cam Romero.