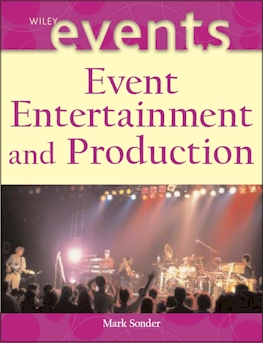 Washington, DC (CelebrityAccess News Service) – Finally, there is a tool that covers the event entertainment and production biz from A through Z. If fact, that’s the name of the book: Event Entertainment and Production. Industry expert Mark Sonder was given the moniker, “he wrote the book” many years ago. With Wiley & Sons releasing Sonder’s first book this Friday, it’s no longer just a tag line…he really did write the book.

Mark Sonder was weaned on entertainment and event production. Probably why the New York publisher went to Mark when they saw a market. Sonder has been involved in every aspect of the entertainment business for nearly 25 years. He has worked with such greats as Frank Sinatra, Tony Bennett and Cher, to name a few. Mark’s academic background is just as impressive. Both his Bachelors and Masters are from the Manhattan School of Music; and he’s on faculty at The George Washington University.

Event Entertainment and Production is extensive in its references and application. This is what Dr. Joe Goldblatt, past Dean of Johnson & Wales University, had to say, “…this book is the most comprehensive compendium of entertainment, and production art, and science that has ever been assembled.” Pre-release reviews have been stellar, from professors and practitioners alike.

This remarkable book covers everything from research, and planning, to production, and best practices. It also includes sample contracts, and other helpful tools. Event Entertainment and Production is a must read if you have anything to do with planning, or producing meetings, and events. This book would be a handy desk reference for anyone in the Event business.

Mark Sonder can be reached at:
703-968-8670
marc@ msonder@marksonderproductions.com