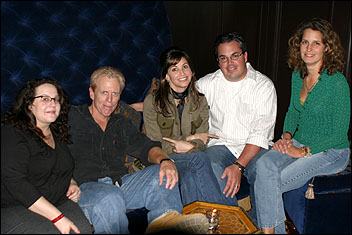 Los Angeles, CA (CelebrityAccess News Service) – The same team that took a soundtrack on tour with Down From The Mountain (music from the film "O Brother Where Art Thou?") just did it again with Gina Gershon and "Prey for Rock & Roll." Taking a soundtrack on tour to market a film is not a marketing tool that many films can take advantage of. But when there is a soundtrack that calls for it, House of Blues and Immortal Entertainment are the team that can make it happen!

Gina Gershon recently wrapped up an 8 -city tour that celebrated the nationwide release of the feature-film, "Prey For Rock & Roll" (MAC Releasing), and also the "Prey for Rock & Roll" soundtrack (Hybrid Recording). The tour kicked off September 25 at the House of Blues Sunset Strip to a capacity house. Other highlights of the tour included the Great American Music Hall in San Francisco, House of Blues Chicago, Antone's in Austin TX, Joe's Pub in New York and the North Star in Philadelphia.

"Instead of doing a press junket for the film, Gina did a club tour. It was so successful that we're doing additional dates," said Lisa Battista Giglio, HOB's Director of Tour Development. Due to the overwhelming response in sold-out shows for the Gina Gershon "Prey for Rock & Roll" Tour, House of Blues and Immortal Entertainment will be announcing additional tour dates in the southeast shortly. Gershon is currently preparing for the upcoming dates as well as working on new material. –by CelebrityAccess Staff Writers