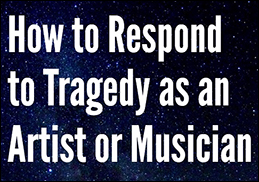 (Hypebot) – Bob Baker is one of the more thoughtful voices in DIY music; and his ideas about how musicians might respond to the Las Vegas attack are particularly poignant. "I wrote and published the first version of this post after the Boston Marathon bombings in 2013," Baker shared. "Unfortunately, I have updated and republished it many times since then, as more unthinkable events have taken place."

When tragedy occurs we are all affected in some manner. We each have different ways of reacting to and coping with disturbing displays of senseless violence. Don’t natural disasters wreak enough havoc on our lives? Why would certain individuals be so hard-pressed to ruin the lives of innocent people?

What can we do about it? And as a musical artist with a fan base to speak to, what can YOU do about it? You may feel helpless. Should you do anything at all? Only you can answer that. But here are a few important options to consider:

1) Write a song about it

You’re an expressive being. That’s why you became an artist. So put that creative sensitivity to good use and channel your confusion and emotions into a song.

The song can be an obvious or not so obvious reference to Paris (or Sandy Hook, Boston, Aurora, Egypt, Israel, Baghdad, Kabul, etc.) Also, a song inspired by such an event doesn’t have to be sad or political or only about loss. It can also be about the care and helpfulness on display by the majority of people when bad things happen. Choose an aspect of the tragedy that resonates with you and write it.

Doing that alone can be therapeutic for you, even if you never let anyone else hear it. But if you decide it’s worthy of public consumption, share it. Your song just might touch and help a lot of other people too.

2) Do a fundraising event – if appropriate

Think this one through before you commit to it. An event to raise money for a cause should have a purpose and be very focused. With a natural disaster, it makes sense to raise money for widespread general purposes, such as the Red Cross. But with an event where humans have inflicted pain on other humans, a more personal touch is best.

If you know a specific person who was injured or whose family is being adversely affected, having an event to raise money to cover their expenses would be a good one. The more specific and personal, the better.

3) Address it at your live shows

In the week following any particular tragedy, you should think through how and if you will mention it when you perform in public. And if you do bring it up, in what context will that be?

It’s real easy in the aftermath of these senseless, unthinkable acts to feel angry. It might seem like a great outlet to vent your frustration by lashing out at whoever did this. You could create solidarity by whipping the crowd into a frenzy of “we’re fed up” unity.

But is that the best use of your platform? Is anger the response you want to create among your tribe? Is revenge or disgust the feeling you want to leave your fans with?

I can’t answer that for you. Only you can. But another option to consider is focusing on the goodness of people that is always on display in horrific situations. Consider the mass of people who usually race to help those in need during a tragedy. You could use your clout to generate more love and cooperation … and less fear and hate.

Don’t get me wrong. I’m not saying we should roll over and turn the other cheek. I’m all for tracking down who did it and apprehending (or eliminating) them. But if I’m not in a position to do that myself, focusing on anger and frustration doesn’t do me or anyone any good.

I’m also not implying you shouldn’t use your position to inspire people to take action. Perhaps a tragic event is the perfect time to encourage peaceful protests, or changes to existing laws, or putting pressure on elected officials. Maybe being fed up is the proper response.

Again, it’s your call. But I suggest you take a breath and get clear before expressing your views on such events – now and in the future.

4) Reference it online and by email

The same sentiments I expressed in the previous paragraphs apply to your online and electronic communication with fans. Think about the ultimate message you want to convey and the real feeling you want to leave people with. Is it one of sorrow? Grief? Hope? Change? Love?

There’s no one right answer here. But thinking it through can make all the difference in the world.

When you’re an artist with any amount of a fan base at all, you have a responsibility. Your words matter. People care what you think. You have the power to sooth people during tough times and help them get through it.

With much love to you and yours,

P.S. Listen to the video version.