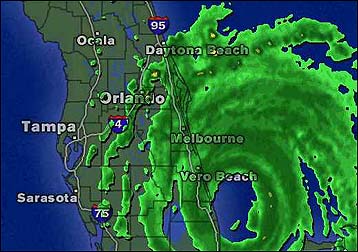 FLORIDA (CelebrityAccess MediaWire) — A wave of concert and event cancellations and venue closings rolled through Florida as it prepares to get hit with Hurricane Frances.

CelebrityAccess has the run-down on some of the venues and events affected:

Bernie Dillion, Seminole Hard Rock (Hollywood):
"We were supposed to have a world championship boxing event for ESPN that was cancelled late on Wednesday. There is no reschedule date at this time."

David A. Williams, Nightown Nightclub (Destin):
"We have not rescheduled any events. We have Coolio at Nightown and are still planning on doing him."

Fred Golup, Round Up (Davie):
"Hurricane Frances has made us close the business tonight (Friday) and possibly tomorrow night, and we had Tracy Lawrence in concert for Sunday night and that concert has been postponed."

Scott Carswell, The Moon (Tallahassee):
"We have cancelled Lou Gramm and I expect our weekly dance nights will be effected greatly. Like tonight, we expected to be slow, due to the FSU Miami game being in Miami next Monday night. Now that is has been rescheduled, we will have a sell out hurricane party for all the folks running from South Florida. All the rooms in our town are full and the roads are crazy."

Christina Langston, City of Jacksonville:
"The Gateway Classic football game was to be played in ALLTEL Stadium on
September 4, but was canceled due to the impending storm. This was the
only event that the city was involved in this weekend."

Shannon Conner, Tampa Bay Performing Arts Center:
"As of now, the Tampa Bay Performing Arts Center will remain operational and will conduct business as usual throughout the weekend. We are constantly monitoring the Hurricane's track. Stageworks' All My Sons is the only show we have this weekend and it will go on tonight, tomorrow and Sunday unless the track of the hurricane changes."

Lionel Dubay, University of Florida – Stephen C. O'Connell Center (Gainesville):
"The University cancelled all weekend events. The home opening football game between the Gators and Middle Tennessee in the Stadium was rescheduled to Oct. 16 by the athletic dept."

Allen Johnson, The Lakeland Center:
"We have cancelled all events beginning at noon today, including the World Premier performances of Disney on Ice, Disney/Pixar's Finding Nemo shows scheduled for today and tomorrow, which is disappointing. We are planning on preparing 1,500 meals for recovery workers after the hurricane."

Gaye Levine, Club Neptunes (Ft. Myers):
"To say that we have been sidelined is an understatement! We are on Sanibel/Captiva Island that was hit hard by Charlie….now here comes Frances…everything is on hold and there is a surreal sense of wonder and the question of the day is…'ARE YOU F*****G KIDDING ME'????? No one can believe it. We have been without power for three weeks on Captiva and two weeks on Sanibel. Ft. Myers had less impact but there is a sense that nothing is the same. When you cross over the causeway to go into the city, it almost seems like nothing happened. The islands have been crippled, and with everyone trying to get things back to normal its hard to think or plan or do anything that is 'entertainment' related."

Robert Rose, Tampa Convention Center:
" All activities are going on as scheduled at this time. Should things change drastically with the tracking and local impact of the storm, we will evaluate the best options at that time."

Mike Toms, Churchill's (Miami):
"We have not cancelled anything at the moment. These storms, as we know, are so unpredictable as is business in August and September that we don't want to shut down unnecessarily. That being said, safety is paramount for our employees, artists and customers and we don't want anyone placed in harm's way."

Roland Guilarte, Brevard Jazz Series (Melbourne/Melbourne Beach):
"This hurricane is definitely effecting my business in a direct way. Right now our venue on Melbourne Beach is being pounded and they have already lost
part of their roof. We expect it to be out of commission for several weeks.

"Our main venue, the King Center in Melbourne, is also a concern. King Center
officials are also concerned about their structure especially the roof. The
potential for damage could cause my next event to be canceled. I estimate that I
may be without a venue for months, thus costing me many thousands of dollars
which could be crippling since I am a small, independent corporation."

Tim Schmand, Bayfront Park (Miami):
"As a matter of fact we had three events scheduled for this weekend. Friday night was to be the Pakistani Festival in the Amphitheater, which had been rescheduled once because of Hurricane Charley. Saturday we were working with Transporter 2 to do some filming in Bicentennial Park (one of our venues) and Sunday, we had the Funkmaster Flex show scheduled in Bicentennial, as well. And, of course, we are going to work with the promoters and producers to reschedule everything."