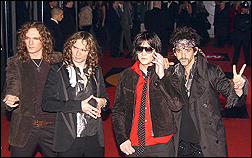 (CelebrityAccess MediaWire) — After suffering from diarrhea and stomach pains, The Darkness' Justin Hawkins' medical conditions forced the band to pull out of the Summer Sonic Festival in Osaka on August 7 and Tokyo on August 8 in Japan to give Hawkins the chance to recuperate.

According to reports, the singer has become run-down because of The Darkness' hectic tour schedule. They just completed a run of European festivals. According to a doctor's note, Hawkins has been suffering from what he
describes as "diarrhea associated with abdominal pain and discomfort–a bout of gastroenteritis." It was recommended by his consultant "to take at least one week to rest
and recuperate before recommencing his busy work schedule."

The band is expected to perform in Austria on August 12 and continue on with its schedule." – by Jane Cohen and Bob Grossweiner.