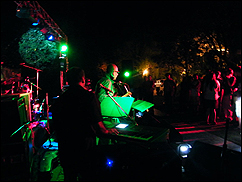 NEW DELHI (CelebrityAccess MediaWire) — Though the scope of the summer festival market is well known in the U.S. and Europe, India now appears poised to take its place in the festival scene.

India has long had a tradition of traditional music combined with religious and spiritual gatherings, such as the triennial pilgrimage, which can attract as many as 60 million people.

But contemporary music festivals have been a much more recent occurrence, spurred, in part, by the growing Indian middle class.

One such event, "Escape" held in May in the north Indian town of Naukuchiatal which saw 30 established and emerging Indian artists with genres from across the spectrum from heavy metal to reggae.

According to the IFPI, India is the world's 14th largest music market with an increase of 16.5 percent from the previous year, while more traditional markets such as the U.S. and Japan have posted declines. Performance rights revenue was up as well in Indian, leaping to $40.1 million in 2010 from $26.2 million in 2009.

"The scene is getting better in India. Initially, five, six years back, there were no festivals. It’s just starting to pick up," Randeep Singh from the band Menwhopause told the Pakistani press. Menwhopause is the only Indian band who made the scene at SXSW this year.

And it is not just Indian artists who are drawn to festivals in the country. This year's Bacardi NH7 Weekender, held in the city of Pune, paired some of India's top acts with established UK acts such as Asian Dub Foundation and the Magic Numbers in front of thousands of fans, making it one of the country's biggest contemporary music festivals.

"Every year has been a learning experience and every year we’re trying to tighten up the whole thing and take it a little step further. So you keep on changing the entire equation to see how it works and hopefully you’ll come to an equation that finally works completely," he said. Escape founder L. Tochhawng told central Asian newspaper Dawn.