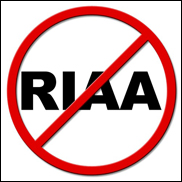 WASHINGTON (Hypebot) Supporters of the net collective Anonymous, which organized an effective takedown of sites controlled by the Motion Picture Association Of America, have now set their sights on the RIAA. "Operation Payback", dubbed by Torrentfreak as the "protest of the future" forced both RIAA.com and RIAA.org offline on Sunday. In a statement, the group originally targeted only Airplex software for the that company's public vow to force PirateBay offline:

"How fast you are in such a short time! Aiplex, the bastard hired gun that DDoS'd TPB (The Pirate Bay), is already down! Rejoice, /b/rothers, even if it was at the hands of a single anon that it was done, even if ahead of schedule. Now we have our lasers primed, but what do we target now?

We target the bastard group that has thus far led this charge against our websites, like The Pirate Bay. We target MPAA.ORG! The IP is designated at '216.20.162.10', and our firing time remains THE SAME. All details are just as before, but we have reaimed our crosshairs on this much larger target. We have the manpower, we have the botnets, it's time we do to them what they keep doing to us.

REPEAT: AIPLEX IS ALREADY DOWN THANKS TO A SINGLE ANON. WE ARE MIGRATING TARGETS'.