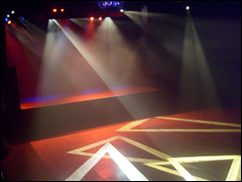 The Chaos club night will be comprised of an open dance floor, three full service bars, an internal video network and a VIP Lounge for the upscale clubber. The VIP Lounge will offer table reservations and bottle service. Kicking off the series will be DJ Devin Lucien, one of the leading "open format" D.Js in the US.

Pure is one of the top nightclub operators in the world and the list of properties they oversee include: include PURE Nightclub and Venus Pool Club at Caesars Palace Hotel & Casino; LAX Nightclub, Noir Bar and Company Lounge inside Luxor Las Vegas; Christian Audigier The Nightclub at the Treasure Island Hotel & Casino; Dick's Last Resort at the Excalibur Hotel and Casino; Coyote Ugly at the New York-New York Hotel & Casino, all located in Las Vegas and Aura Nightclub at Atlantis, Paradise Island, Bahamas