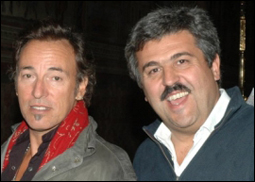 MILAN, Italy (VIP NEWS) — Claudio Trotta, head of the Milan-based promoter Barley Arts, was found not guilty of disturbing the peace after a Bruce Springsteen show breached the venue's curfew.


He was facing a one-month prison sentence following the Springsteen concert at Milan's San Siro soccer stadium last year. The concert, which was attended by 65,000 fans on June 25, 2009, overran its agreed closing time by 22 minutes. Local residents complained and Trotta was charged with disturbing the peace.


In a statement, Trotta said that he is naturally "happy" about the verdict, but added that "a deep wound still exists. During the trial it was alleged that Springsteen had been paid on a per-minute basis to play an encore."


Trotta said that this showed "a serious lack of respect not only towards Springsteen and myself, but also towards the members of the public."


He concluded that the acquittal "shows that people are in fact free to gather together and enjoy both life and a great show."