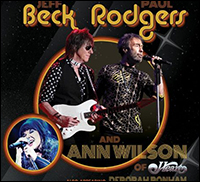 “I always enjoy touring the U.S. in the summer and joining with Paul, and Ann Wilson, should make for quite an exciting night,” Beck said in a statement.

“This is going to be a knock out combination of music and musicians,” Rodgers added. “I’ve always been a Jeff Beck fan, who isn’t? He is in a league of his own. Ann Wilson has an amazing voice and is a brilliant songwriter. 2018 marks the 50th Anniversary of ‘Free’ and I hope we can touch your spirit with the ‘Spirit of Free.’”

“I am thrilled to have been asked to perform on the Stars Align Tour with Jeff Beck and Paul Rodgers,” Wilson said. “They are both long time favorites of mine! They are masters at their craft and it is an honor to share the stage this summer.”

Beck has eight Grammy Awards on his shelf and has been inducted into the Rock And Roll Hall Of Fame not once but twice – as a solo artist and as a member of The Yardbirds. He celebrated 50 years of his career as a guitarist last year with a performance at the Hollywood Bowl. Rodgers has fronted bands like Free, Bad Company and The Firm, and for a little while handled vocals for Queen + Paul Rodgers.

Wilson released her solo album Beautiful Broken in 2016 and toured it alongside Joan Jett & The Blackhearts and Cheap Trick.