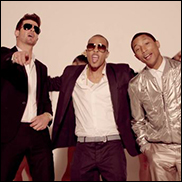 (Hypebot) – The Blurred Line legal battles continues. The court both reduced an earlier judgment against Pharrell Williams by $2.1 million and granted Marvin Gaye's family a 50% share of all future royalties. Both sides vowed to appeal.


A federal judge reduced the $7.4 million "Blurred Lines" verdict against Pharrell Williams by $2.1 million, but ruled that Marvin Gaye's family is entitled to 50 percent of future royalties.


After a seven-day trial in March, a jury delivered a verdict that stunned the music industry, ruling that R&B star Robin Thicke and Pharrell had copied Marvin Gaye's classic "Got to Give It Up."


Thicke shared credit with Pharrell, who created and produced the song, along with rapper T.I. who supplied guest vocals on what became one of the best selling singles of all time.


In 2013, the pop stars claimed their composition only evoked an era and the feel of Gaye's music and sued the Gaye family in a preemptive lawsuit, after the family threatened legal action. Frankie Christian Gaye, Nona Gaye and Marvin Gaye III, responded with a claim that "Blurred Lines" infringed on their father's 1977 Motown hit.


The jury agreed, awarding the family $7.4 million in damages.


The court battle did not end there. Pharrell and Thicke's lawyers quickly moved for a new trial, arguing that expert testimony, as well as submission of Thicke and Pharrell's statements to the press and media in promoting the song, were prejudicial. Furthermore, the stars argued, the jury should have not have heard an edited version of "Got to Give it Up," and jury instructions were flawed.


But in an order filed Tuesday, U.S. District Judge John Kronstadt denied Thicke and Pharrell's motion for a new trial finding that "substantial evidence" supported the verdict. The judge also overturned the jury's finding that T.I., real name Clifford Harris, and Universal are not liable for infringement.


He remitted actual damages from $4 million to $3.2 million. A profits award against Pharrell was trimmed from $1.6 million to $357,630.96 bringing the total damages award down to $5.3 million. Kronstadt found that the amount of publishing revenue was closer to $6.4 million than the $8 million presented to the jury. "The Gaye parties advance no other argument as to how the jury could have determined, based on the evidence presented at trial, the publishing revenue equaled or exceeded $8 Million," the judge wrote.


An award against Pharrell based on his $860,333 in producer royalties was excessive, the judge said in his 56-page order.


"It reflects a profits-to-damages ratio of 187 percent, which is approximately 4.7 times greater than the 40 percent ratio that was used in the calculation of damages as to Thicke's profits," Kronstadt found. Thicke was paid $4.4 million in royalties. The judge left untouched an $1.8 million award against the pop star.


Granting the Gayes' motion for a judgment that past and ongoing exploitation of "Blurred Lines" infringes the family's copyright in "Got to Give It Up," Kronstadt nonetheless denied its request for a permanent injunction against "Blurred Lines" and an order impounding all copies of the song.


But in a big win for the Gaye family, the judge granted the family's request for ongoing royalties of 50 percent of songwriter and publishing revenues.


Pharrell's attorney Howard King said he would appeal the ruling.


"While we certainly respect the diligence and care devoted by the court throughout these proceedings, we must agree to disagree on the conclusions," King told the Hollywood Reporter. "We look forward to exercising our further remedies and ultimately achieving clarity on the difference between inspiration and copyright infringement."


The Gayes' attorney Richard Busch told Rolling Stone that Thicke and Pharrell had embarked on a "public relations campaign" for a new trial by attacking the eight-panel jury's findings. "The judge who actually heard all of the evidence disagreed. I am thrilled for the Gaye family, and the thoughtful members of the jury, who had to listen to all of that while remaining silent," Busch said.