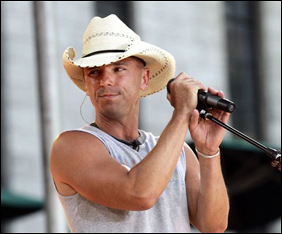 NEW YORK (CelebrityAccess MediaWire) — He's sung "All my friends are pirates, it's just who I amâ€¦," and now three-in-a-row and reigning Academy of Country Music and triple and current Country Music Association Entertainer of the Year Kenny Chesney calls all his friends for the annual good time reason to be: his summer concert tour. With tourmate LeAnn Rimes, Chesney plays 34 cities across America on his Corona Extra sponsored Poets & Pirates Tour.

"It's hard to know which cities to play and which ones to take a break from," Chesney says of his annual fun, sun'n'friendship celebrating concerts. "You want to go everywhere, but then you know you can only do so many cities – and this year's show is going to be very intense. It's not necessarily the tricks or the production, though that's part of it, but just even figuring out the set list, there's an awful to bringing all this together – and this year is going to be amazing."

It all kicks off April 18-19 with a double play in Uncasville, Connecticut. Kenny Chesney's Poets & Pirates Tour 2008 including performances by; Sammy Hagar, LeAnn Rimes, and Gary Allan will play PNC Bank Arts Center in Holmdel, NJ on July 24th. The show will begin at 7:30PM.

"People don't realize going from arena to amphitheatre to stadium to amphitheatre keeps you on your game," laughs the easy-going singer/songwriter who enjoyed 13 weeks at #1 on the Country Singles chart as an artist and an additional 3 weeks as a writer. "Because, you know, I didn'tâ€¦ I don't think I really got how different going from one to the other is, until we were in the middle of it last summer. Then you find yourself going, 'Oh, you can't do that hereâ€¦,' or 'Oh, yeah, tonight's that possibleâ€¦'"

The ability to be so completely in a moment, so alive and so connected to the fans who've come to see him is part of what's distinguished the only artist whose sold over a million concert tickets every year for the past six summers – and whose Flip Flop Summer 2007 Tour was the 2nd biggest tour last year behind legendary rock band the Police's two-decades-in-the-making Reunion Tour. That unfailing will to embody the lives his fans, his friends, indeed Chesney himself live has made the Luttrell, Tennessean's show a rite of summer.

"It always blows me away when people tell me they don't plan their summer trips until they know when your show is coming through," he admits shyly. "I mean, I know there were those acts I felt like that about growing upâ€¦ you know, it wasn't summer if you didn't see'em; you had to be there with your friends or else you missed the show that was gonna make that summer real. The idea that it's me and my guys, well, it still blows me away every time someone in a meet and greet line tells me thatâ€¦".

As "Shiftwork," the Calypso-tinged celebration of hard-working people getting their play on, hits the Top 10 this week, Chesney sees his Tim Hensley Long Monday bluegrass project and Willie's Nelson's Moment of Forever poised to hit the streets next week – and the road starting to rise up to meet him. For a man who thrives on live, good friends and great songs, it's a good time to be Kenny Chesney.