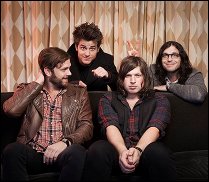 ROSKILDE, Denmark (VIP NEWS) — The Kings of Leon are coming back around to Denmark's Roskilde Festival in 2011. The American rock band returns to the festival as absolute superstars.

Kings of Leon have grown from being a respected alternative rock band to absolute stadium stars.

Kings of Leon also visited Roskilde Festival in 2004 and 2008, and the audience really want them back.
They were the most popular request amongst the Audience.

With Iron Maiden and Kings of Leon, Roskilde Festival 2011 already has a couple of strong flagships in port.