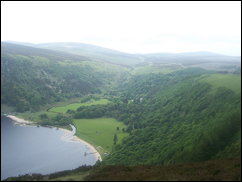 WICKLOW, Ireland (CelebrityAccess MediaWire) — 'A Day In The Life' concert to take place this Saturday September, 13 has been moved from the Luggala Estate to the grounds of the Royal Hospital Kilmainham. Persistent rain has left the site soaking and further floods have swamped the estate after the river at Lough Dan ruptured through the banks.

According to the Irish Times, Promoter John Reynolds, said adverse weather and poor forecast for the week meant production and building at the site was impossible. "I am personally deeply disappointed that this event cannot take place on the Luggala Estate," he said. "Due to the unprecedented rainfall and the nature of the site being a natural valley, the subsequent water logging conditions, have made it impossible to prepare Luggala for a concert."

Luggala, bought by Ernest Guinness as a wedding gift to his daughter Oonagh, one of the so-called Golden Guinness Girls. The estate was a renowned gathering place for Ireland's artists, musicians and thinkers during the 20th century.

Garech Browne, Guinness heir, who resides on the estate named the concert 'A Day In The Life' to commemorate Tara Browne, who died in a car crash in 1966. According to the Irish Times the name of the concert comes from the Beatles song to remember Tara who was a friend. –by CelebrityAccess Staff Writers