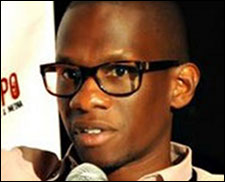 NEW YORK (Hypebot) — Troy Carter's increasingly visible profile, leveraging his early work in hip hop and his role as Lady Gaga's manager, has earned him prestige in music management and marketing circles. But recently his profile has begun to include involvement in both funding and founding tech startups in music and social media with related appearances and mentions at high profile events.

Best known for his management of Lady Gaga, Troy Carter has a rich background in the music industry with an early career in urban music that included working with Diddy. He is now described as "Founder, Chairman and CEO of Coalition Media Group" which is apparently a division of Atom Factory where his bio is as limited as most other sources. However, his involvement in the world of tech startups seems likely to move him more strongly into the spotlight.

In his recent appearance at Facebook's F8 conference on a panel about the Future of Digital Music, Carter stated that he'd like to try giving away Lady Gaga's next album. Coming from someone as well situated in the music industry as is Carter, it is a dramatic statement that one wishes the panel moderator had pursued. But it also signals Carter's increasing alignment with perspectives from Silicon Valley.

Carter recently appeared at Ad Age's Digital West conference where, among other things, he discussed Lady Gaga's wide range of brand relationships with such companies as Google and Starbucks.

But, in a related Ad Age interview, it was his involvement with social media and music startups that became the focus of attention. Carter invested in url shortening/promotions company Bre.ad and also invested in Tiny Chat and Lumier before his more widely noted investment in Turntable.fm. He also cofounded Backplane, a yet-to-be-launched social network.

According to the AdAge interview Carter helped establish the Menlo Talent Fund with Shervin Pishevar and he stated that we'll "probably hear some really cool announcements coming soon, there's some really cool things in the pipeline." Regarding his interest in music startups, Carter says:

"The more people are listening to music and experiencing it, the more value for both the music companies and the artist, especially when their financial model is built around that…A lot of people get the music for free but still come to the concert or buy merchandise…The music industry really has to learn a lesson from the tech industry about what scale means … [and] how to monetize."

A report from TechCrunch Disrupt clarifies that Shervin Pishevar is head of Menlo Ventures, the investment group that is overseeing the Menlo Talent Fund. A news item on that site clarifies that Troy Carter is part of the Menlo Founders Council that will advise entrepreneurs.

Whatever the exact details, Carter is clearly increasing his business involvement with tech startups and seems likely to become a much more visible figure as a result.