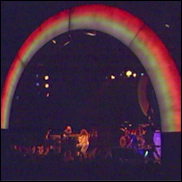 NEW YORK (CelebrityAccess MediaWire) — Inspired by the American cinema
classic "Field of Dreams" and barraged by fans asking him when Rainbow
would reunite, ex-Rainbow singer/songwriter Joe Lynn Turner has often
thought, "If we build it, the fans will come."

During the first three tour dates as Over The Rainbow, the newly
formed band has already played to fanatic capacity crowds in Minsk,
Belarus (4,000+), St. Petersburg, Russia (3,500+) Moscow (4,000+).
Details about the formation of Over The Rainbow were only released two
months ago but the buzz generated by fans and interested concert
promoters was so intense that it comes as no real surprise that this
tour has been an immediate success.

As for how the Over The Rainbow project was started, Turner respected
the fact that Rainbow founder Ritchie Blackmore had found true
happiness working with Blackmore's Night. He knew Ritchie was not
interested in getting Rainbow back together for a sequel. After
meetings, phone calls and e-mails, Turner united members of several
Rainbow incarnations from the past with a unique twist: He enlisted a
second generation Blackmore on guitar to build Over The Rainbow.

Ritchie's son, guitarist Jurgen "J.R." Blackmore, was so convinced
that Rainbow fans deserved to hear this music come alive again that he
agreed to take on the enormous challenge of playing guitar for Over
The Rainbow.

Jurgen states, "I talked to my Dad about this project, and he said,
'Yes, go for it,' in couple of seconds. He gave me his blessing, and
that is what I needed to hear. He told me how great all the members
were. That was really encouraging."

Although the band's set list includes benchmark songs from all of
the Rainbow eras, Over The Rainbow is not trying to do them exactly
like they were done in the past. Drummer Bobby Rondinelli explains,
"This is not Rainbow – it's Over The Rainbow. It's in the Rainbow
tradition, but it's a new band based on this great tradition."

Keyboardist Tony Carey, who also has a lucrative career as an
international producer, songwriter and vocalist, adds clarification,
"You can play the same piece of classical music with a solo piano or
100-piece orchestra. We are playing Rainbow material but are playing
it our way." Carey is also rejuvenated by the enormous fan reaction as
he adds, "Right now we're kids in a candy shop, never had this much
fun out of bed."