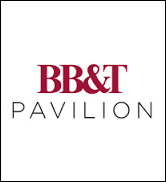 PHILADELPHIA (CelebrityAccess) — Lawyers representing seven concert-goers who were injured after a railing collapsed during a Snoop Dogg and Wiz Khalifa concert in New Jersey have filed a lawsuit alleging that the venue operators and performers failed to ensure a safe experience.

The lawsuit stems from an Aug. 5 at Camden's BB&T Pavilion where a large section of railing collapsed, spilling people from a raised lawn section to a floor below in an approximately 10-foot fall. Authorities said at least 42 people were injured in the fall, including one victim who attorneys said suffered a fractured spine, the Associated Press reported.

Lawyers say concertgoers were trampled and pinned to the ground, leaving some with broken bones and tissue damage, attorneys for the plaintiffs said.

In a video of the incident captured by a member of the crowd, the performers can be heard to encourage people to crowd close to the rail shortly before it collapsed.

"I can tell you there is no doubt there was a crowd surge based upon the setup of the lawn with no chairs and no aisles, lack of security … and then the artists telling people to come forward," attorney Robert J. Mongeluzzi told the AP. "That's the setup, and that's the failure."

The lawsuit, filed in a Philadelphia court, does not stipulate what damages are being sought.

Live Nation, the operator of the BB&T Pavilion declined to comment to the AP, citing the pending litigation. – Staff Writers