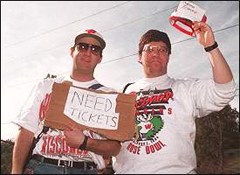 LONDON (CelebrityAccess MediaWire) — The director of a secondary ticket brokery that has been linked to a number of ticketing fiascos, including one involving tickets to the Olympics, confessed that more than £2 million has vanished.

Alan Scott, director of Xclusive Leisure and Hospitality told a liquidation meeting that he cannot trace the alleged ticket supplier who he paid to deliver tickets. Scott's firm, operating under the website beijingticketing.com, took money from thousands of Olympics fans but did not deliver a single ticket, the Mirror reported. Scott points at his supplier who he claims absconded with the money, leaving Scott and Xclusive no money to pay creditors with.

"I will not have the word 'cheat' thrown at me, I'm the big loser in this." Scott noted.

Among the people who attended this September 9th meeting was Texas lawyer Jim Moriarty, a class-action specialist who is representing clients from 12 different countries. Unsurprisingly, Moriarty was vocal about his desire for justice for his clients. "I want people jailed over this," he told the Mirror "For thousands of victims the loss was intensely personal. Many were parents of Olympians who wanted to see their son or daughter walk into the arena. This is not over."

Moriarty has also taken issue with ticketing sponsorship deals for the forthcoming 2010 Vancouver games. One such deal requires that Visa, an Olympic Sponsor, be the exclusive credit card that can be used to purchase tickets to the games.

"My overall perspective is that the Olympics has degraded into a fun fest for the corporate sponsors and they've gotten far afield from their purpose in serving the athletes," Moriarty told the Canadian Press. – CelebrityAccess Staff Writers