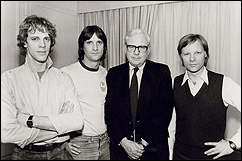 LOS ANGELES (CelebrityAccess MediaWire) — Ian Copeland, the booking agent and music impresario who helped create the Punk and New Wave movements of the 1970s and 1980s, died surrounded by his family in Los Angeles May 23, 2006 of melanoma. He was 57.

Copeland was the founder of Frontier Booking International (F.B.I.), a prominent New York-based talent agency that represented such seminal rock acts as the The Police, R.E.M., XTC, The B-52’s, The Go-Go’s, The English Beat, The Bangles, and Nine Inch Nails.

Copeland was the third-born of four siblings. Along with his two brothers, each had a major impact on the popular musical landscape of the late 1970s and early 1980s. His younger brother Stewart was the founder and drummer of the rock supergroup The Police and went on to become a successful film and television composer. His older brother, Miles was the founder of International Records Syndicate (I.R.S.), a record label whose acts included R.E.M., The Go-Gos, Black Sabbath, Oingo Boingo, Wall of Voodoo and General Public. Older sister Lorraine (Lennie) is a writer and producer.

Born in Damascus, Syria on April 25th, 1949, Copeland was the son of the late Miles Copeland Jr., a former jazz trumpeter turned U.S. intelligence officer, and Lorraine Copeland, a Scottish-born archeologist. Although he was born in the midst of a Syrian military coup his father helped foment, Copeland was 15 before he and his brothers learned that Miles Jr. wasn’t the international businessman he purported to be.

Ian spent much of his childhood traveling around the Middle East. His Alabama-born father, who helped transition the wartime OSS intelligence agency into the civilian CIA, was instrumental in bringing Gamal Abdel Nasser to power in Egypt in the mid-1950s. He later settled the family in Beirut, Lebanon, where he became the station chief of the CIA’s Middle Eastern bureau.

Copeland’s teenage years were inauspicious; he barely scraped by in school and fell in with a motorcycle gang given to petty crime. But in 1967, at the height of the Vietnam War, he joined the U.S. Army where he was assigned to the First Infantry Division (the famous “Big Red One”) and eventually awarded a Bronze Star Medal, the Good Conduct Medal, four campaign medals, the National Defense Service Medal, the Vietnam Service Medal, the Republic of Vietnam Commendation Medal, and a VBC with palm. Copeland was promoted to Sergeant at the age of nineteen and told at the presentation that he was the youngest soldier ever to make sergeant.. Although back in the U.S. after his discharge, Copeland had misgivings about the Vietnam war, he was proud to have fought for his country. It was during his tour of duty in Vietnam that he earned the nickname Leroy Coolbreeze. The moniker, reflective of his laconic style, eternal optimism and natural ability to put others at ease, remained with him for life

He later moved to London, where, with the help of his brother Miles, who had just begun his own music industry career, Ian landed a job as a booking agent. He soon became one of the top agents in the UK, discovering such talent as the Average White Band. In the mid-70s, Copeland moved to Macon, Georgia, where he worked for the Paragon Agency, which booked tours for popular southern rockers including Charlie Daniels, Lynyrd Skynyrd and The Allman Brothers Band.

While in Macon, Copeland married Constance Walden with whom he had two daughters, Chandra and Barbara.

Excited by what he was hearing from Miles about London’s emerging punk rock scene, Copeland tried in vain to get Paragon to bring the raw new British bands to U.S. venues. When Miles’ record label signed a new U.K. pop band called Squeeze, the brothers arranged for them to tour the U.S. The strategy was to have the band tour smaller U.S. clubs and venues to generate fan support. The plan worked and the “club circuit” was born. Ian and Miles used the same approach to help many more bands, including Stewart Copeland’s reggae-influenced trio The Police and a local Georgia band, the B-52’s.

While The Police were gaining in popularity in the U.S. touring behind their hit single “Roxanne,” Paragon suddenly folded and Ian found himself without a job. After moving to New York and failing to find work at a major talent agency, Copeland decided to start his own booking outfit, F.B.I., specializing in promoting new musical acts on the burgeoning U.S. club circuit. The company’s first major triumph was The Police which, after two years of playing small venues became one of the biggest acts of the 1980s. After The Police broke up, the band’s lead singer, Sting, remained as an F.B.I. client.

Under Ian’s leadership, FBI soon became one of the hottest talent agencies in the music business, representing acts including Adam Ant, The Bangles, The Go-Go’s, The Smiths, The Thompson Twins, The Fixx, UB40, Joan Jett and the Blackhearts, Oingo Boingo, the Dead Kennedys and the Cure. Copeland also signed R.E.M., co-founded by his longtime Macon friend and Paragon co-worker Bill Berry. FBI also became a major training ground for agents who continue to populate the music business today in top positions.

While Copeland’s business continued to boom, the long hours and rock ‘n’ roll lifestyle cost him his marriage. He later had a three-year relationship with actress Courteney Cox, who started as a receptionist for F.B.I.

The three brothers were named humanitarians of the year in 1985, by the AMC Cancer research Center.

In 1995, Simon & Schuster published the autobiography Wild Thing: The Backstage, On the Road, In the Studio, Off the Charts Memoirs of Ian Copeland. A risk-taker by nature, Copeland summed up his philosophy of life as simply as the rules of a children’s game of chance: “Like in the game Snakes and Ladders I played as a child in Cairo, you have to roll the dice and make your move. Then you have to live with where you land and make the most of it.”

In recent years, Ian started The Backstage Café, in Beverly Hills, which continues to be one of the most successful hang-outs in the city.

Copleand is survived by his two daughters Chandra and Barbara, his mother Lorraine, his brothers Miles III and Stewart and his sister Lennie.

A private funeral service will be held Tuesday in Los Angeles. Memorial plans are pending.