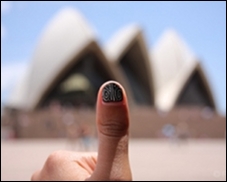 In a frenetic year which saw the likes of AC/DC, U2, Bon Jovi, Metallica and the Eagles tour these shores, the market's live biz soared to an all-time high of Australian $1.327 billion ($1.4 billion) in gross ticketing revenue, up 22.6%, according to trade body Live Performance Australia's 2010 "Ticket Attendance & Revenue Survey."

Contemporary music concerts made the biggest noise. The sector generated a 43.1% rise in revenue to A$659 million ($708 million), towering over the next biggest category musical theater and its A$242 million ($255 million) revenue.

Rock 'n' roll, it would seem, made a mockery of the GFC.

With the Australian currency nudging record highs of nearly US$1.10 to the local dollar (until the recent stock-market turmoil caused it to dip this week), the trade body admits the combination of the strong buck coupled with weaker economic conditions in traditional northern hemisphere touring markets may have helped attract a greater number of international artists Down Under.

Accountancy giant Ernst and Young compiled the data on behalf of LPA, drawing stats from a sample which included ticketing firms Ticketmaster and Ticketek and, for the first time, digital firm Moshtix. Also reporting for the first time is the Darwin Entertainment Centre. Richardson and the LPA are quick to point out that "caution should be applied" to comparing the data across recent years as inconsistencies may exist in the data collection methodology. And in the years ahead, the range of data-reporting sources will continue to grow. Nevertheless, the LPA's study provides the most comprehensive snapshot of Australia's thriving live market.

Impressive as they are, the results published this week are no surprise to the ranks of Australia's impresarios. "We have just gone through the busiest summer period (2010/11) in the history of our business and most promoters came out relatively unscathed," says promoter Michael Chugg, chairman of Michael Chugg Entertainment, whose company in 2010 toured the likes of AC/DC, Gorillaz, Tim McGraw and John Mayer.

"Overall," says Chugg, "touring has never been stronger. And over the last couple of years, live has been fantastic on all fronts. There is no doubt Australia is the healthiest touring market in the world right now."