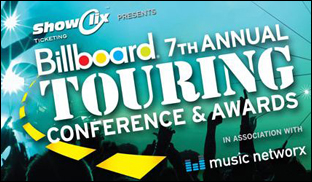 NEW YORK (CelebrityAccess MediaWire) — Live Nation had a big night at the 2010 Billboard Touring Awards, which were held on November 3rd and 4th in New York.

Live Nation nabbed the prize for the year's top promoter and their U2 360 Tour took home the award for Top Tour and Top Draw while Lady Gaga's Monster tour was recognized as the year's top 'Breakthrough' tour.

Also picking up the award for Top Festival, was Live Nation UK's Download. This is the second time the event has chalked a mark in the win column and last took home the prize in 2007.

This year marked the 7th return of the annual awards show and industry confab, and it was presented by ShowClix, in association with Music Networx and programmed by Billboard's own Ray Waddell.