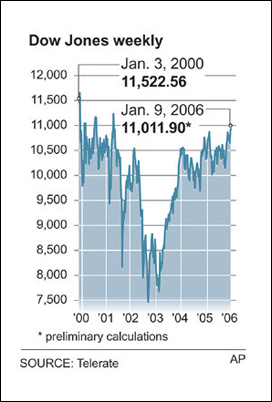 (CelebrityAccess MediaWire) — Despite the tough times faced by the music industry in the past few years, company stock in Live Nation has become a hot ticket on Wall Street.

Since Live Nation began trading as a separate company from former parent Clear Channel Communications on December 21, the price of shares for the entertainment group has soared nearly 25 percent, from $11 to over $14 as of January 12.

Guzman & Co. media analyst Phil Remek told CNNMoney.com that some investors may have been tempted to buy the stock because there has been so much negative buzz about the concert industry, and with such a low opening price, the risk may have seemed minimal.

“Potentially, investors were looking for a bargain since expectations were low,” he said.

Live Nation also succeeded in making itself more intriguing to value investors when it announced the plan to buy back as much as $150 million in stock by the end of 2006. Investors view buybacks favorably since they lower share count and, therefore, boost earnings per share.

Analysts warn that just because Live Nation has made some shareholder friendly moves, it doesn’t mean that now is the time to dive into the stock. Some predict that professional investors may even look to sell the stock since the prices has risen so quickly to such a high level.

“I don’t think there’s been a change in sentiment about the live entertainment business. It hasn’t been a great business and I don’t expect the fundamentals to shift,” said RBC Capital Markets analyst David Bank.

Live Nation, whose revenues dipped 3.4 percent during the first 9 months of 2005, had net profit margins of just 2.1 percent in 2003 and below 1 percent in 2004 and the first three-quarters of 2005. At the time, it was still doing business as the Clear Channel Entertainment division.

“When will there be a consumer backlash to high ticket prices? People predict that consumers will walk away but it hasn’t happened,” he said.

He said this may not last for the long term, however, since there appears to be few younger artists that can command top ticket prices.

“How many more Rolling Stones tours can there be?” Remek asked. “Consumers will pay up for quality content but there is a limited amount of real talent out there. That is a real issue for all aspects of the music industry.”

Live Nation has a small safeguard against future profit losses by producing non-concert material, such as touring versions of Broadway shows and motor sports events. The theater business had a profitable 2005, with revenues up 5 percent through the first three-quarters of the year.

But concerts still account for 80 percent of Live Nations total sales, which forces analysts to wonder how long the stock can continue its surge in the midst of this music industry funk. Whether the rising share values or the industry slump with give way first remains to be seen. –by CelebrityAccess Staff Writers

Executive Vice President of Booking Beckye Levin will redirect her primary focus to booking the markets in Tennessee, Alabama, Arkansas, Mississippi, and Louisiana. Previously, she was responsible for ticketing operations, booking policies and procedures, and system programs. Maura Gibson will continue to handle Live Nation ticketing as national director of ticketing. Most booking policies and procedures will soon be handled out of the LA office that Levin will oversee during the transition.

Bob Roux, president, Live Nation Houston, will continue to oversee the day to day operations and booking efforts within the region, with primary booking responsibility for arenas and amphitheaters in Texas and Oklahoma. — Jane Cohen and Bob Grossweiner