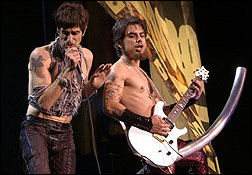 It was no surprise to the music industry that Lollapalooza 2004 was canceled, but the press had a field day with it with titles like Palookaville for 'Palooza in the New York Daily News and No-Lapalooza in The New York Post. CelebrityAccess knew the tour was going to be canceled a few days before the official announcement, but the tour's independent publicist denied it and even said ticket sales were strong. That is what a publicist is paid to do.

There are probably numerous reasons for why the over ambitious tour had poor tickets sales, but the price of the ticket was probably not one of them. With some tickets discounted and priced at $29.50 a day and $50 for two days from the original $50 per day, it was practically the cheapest tickets of the summer outside of the Vans Warped Tour's $30 ducats.

With 25 concerts last year plus two canceled for poor ticket sales, it was decided to pare the tour down to 16 cities with two concerts per city. Some people who saw Lollapalooza last year near where they lived would have to travel more miles to see the show. Since there was no provisions for camping like at Bonnaroo, the costs of seeing both days added up, not to mention the rising cost of gasoline in the country.

The two days of concerts confused some fans."I didn't know which day to go to," Stuart H. told CelebrityAccess while browsing through Tower Records on the Upper West Side of Manhattan two days after the cancellation. "I've always gone to Lollapalooza not only for the acts but to also enjoy the environment. I didn't know which day would be more to my liking."

He also said that since with two day festival was scheduled for Monday and Tuesday in New York, he could not take both days off from work.

Lollapalooza has always centered on a variety of acts, but this year's roster may have been a bit too eclectic with Morrissey, The Pixies, String Cheese Incident and Sonic Youth perhaps more attractive to an older audience that the stereotypical younger Lollapalooza fan. Formed in 1991, Lollapalooza was at the forefront of traveling festivals, but when it took a five year hiatus in 1998, it lost some of its fan base. The high school student in 1998 was either in college or graduated in 2003 and similarly, the college student in 1998 was now either in the armed forces or working in 2003. And the older one gets, the less likely he or she will want to spend a day in the sun listening to music, some of which is not skewered to them.

"The vast majority of the bands on the bill this year were big 10-15 years ago," says Tony Sachs, co-owner of NYCD, a mom-and-pop independent record store on the Upper West Side of Manhattan, told CelebrityAccess. "The last time I went to Lollapalooza was in 1992. Back then, I was 23 and could think of no better way to spend 12 hours than sweating my tail off on a hot summer's day, watching over half a dozen bands. In 1994, I had tickets, but it rained, and I didn't see anything."

"Today's 23-year-olds have their own bands," he adds, "and they don't want to see nostalgia acts like Morrissey and the Pixies. And I'm too old to spend a day sweating and watching live music. If any of the bands on this year's bill played a small venue individually, I'd shell out the price of a Lollapalooza ticket (if not more) to see them in a minute. But seeing all of them together is no longer an appealing idea to over-30s. In fact, it's a deterrent. I also don't want to see bands that traditionally play small or mid-sized venues in an amphitheater or a stadium setting. What's appealing about that?"

"It's no mystery to me why this year's Lollapalooza festival was canceled," says Sachs' partner Sal Nunziato. "What levelheaded, music-loving Pixies or Morrissey fan, who is now in his 30's, wants to stand outdoors and endure so many uncomfortable hours of a camp-like setting, to see the one or two artists they would happily pay the same price to see headline a much more comfortable venue."

I'd have happily shelled out $100.00 to see The Pixies play a 90 minute show in a comfortable indoor arena," he maintains. "Whereas if I was given a free ticket to shlep out to an open air festival with multiple stages to see a favorite band close a day long event, as a 40 year old guy, I would have to pass."

"Another problem was stretching the event to two days," he feels. "A friend and loyal customer of the store, Ty Bent explained, 'I couldn't decide what day to attend. I really wanted to see The Pixies, but the overall lineup of the other day was better. So, I didn't buy for any, hoping The Pixies would play elsewhere.'"

"Concert promoters will tell you how difficult it is to stage a show or an event," says Nunziato. "Whether it's securing a venue, guaranteeing payment to bands or otherwise, whatever it is, I'm sure they've an answer for the complaining consumer. I just don't think the consumer cares, nor do I believe it is his problem. If he's paying what has become a sinful amount of money for a concert ticket, the last thing he needs to hear is that there are problems."

"How well is Morrissey going to do in the Midwest?" promoter Seth Hurwitz told the New York Times. "I wouldn't venture to guess. The problem is that there is just not a really large interest in alternative music. What was called alternative in the 90's was exploding with something new, with Pearl Jam and Nirvana. It was exciting stuff. They tried to pull together Morrissey and Sonic Youth on an alternative bill, but there are not enough people who care about it." –Bob Grossweiner and Jane Cohen