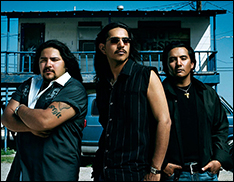 (CelebrityAccess) — 'Texican' blues-rock group Los Lonely Boys has canceled a series of tourdates in the Northeast.

Affected dates included Nov. 5th at Bethel Woods; a pair of dates at City Winery in New York and Boston on Nov. 8 & 9th respectively; Aura in Portland, Me. on Nov. 10 and Nov 11th at Narrows Center for the Arts in Fall River, Mass.

The cancellation were announced in a terse statement on the band's Facebook page: "Unfortunately Los Lonely Boys will be unable to perform on the upcoming dates in the Northeast, Nov. 3-11th."

The statement did not offer a reason for the cancellations, but the band's drummer and founding member Ringo Garza is currently under under investigation by the San Angelo Police Department’s Crimes Against Children Unit

According to USA Today, police opened the investigation after a complaint from Garza's wife, Lenora regarding alleged contact between Garza and a 13-year-old girl.

A search warrant obtained by USA Today contained details of an alleged electronic conversation between Garza and a teen aged girl while she was taking a shower.

San Angelo Police Department’s Crimes Against Children Unit along with the U.S. Department of Homeland Security executed a search warrant related to the case at an address in San Angelo, Texas, where Garza resides and seized multiple electronic devices, including computers, smartphones, digital storage and cameras, USA Today reported.

The San Angelo Police Department said the investigation is ongoing and no other details were available. As of yet, no criminal charges have been filed in the case, USA Today reported.