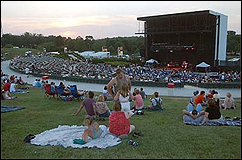 MACOMB COUNTY, GA (CelebrityAccess MediaWire) — Macomb County has won its lawsuit against Hillside Productions, which runs the Freedom Hill Amphitheatre on behalf of the county. Hillside had lodged suit against Macomb County, seeking $250 million in damages and punitive fines, alleging that the County had scuttled a planned merger with Palace Sports and Entertainment.

Macomb had, in turn, filed a counter-suit against Hillside, claiming that Hillside had breached their contract with the County by incorrectly withholding a portion of lawn seat ticket sales. Macomb County was awarded $21,000 based on these claims, the Detroit News reported.

"The county has been totally and completely vindicated," County attorney Albert Addis told the Detroit News, "I'm very happy for my client that they're out from under this cloud."

Hillside Productions leases the 7,000-seat Freedom Hill Amphitheatre from Macomb County but that may be subject to change as a successful finding in the breach of contract litigation opens the door to the county exercising a buyout option in their contract with Hillside.

Attorneys for Hillside Productions have stated that they intend to appeal the ruling. – CelebrityAccess Staff Writers