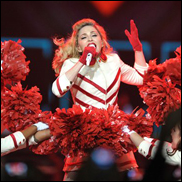 NEW YORK (VIP NEWS) — Madonna's MDNA World Tour has made more money than any other during 2012.

The total amount of money raised was a whopping $228m, according to figures compiled by Billboard.

More than 1.6 million fans have paid to see her perform in more than 65 cities worldwide since last June, including London, Birmingham and Edinburgh.

Madonna's MDNA album reached number one in the UK charts in April this year, the 12th chart topper of her career.


She beat Bruce Springsteen into first place on the highest-grossing tour list, who earned $198 million.


Also in the top 25 were Coldplay, who took fifth place, and Lady Gaga at number six, who attracted audiences reaching 1.1 million people in comparison.


Jay-Z and Kanye West came in at number nine, while Justin Bieber's tour was the 20th highest-earning at $30.6 million.


Madonna's triumph comes despite many controversial moments during her seven-month tour.


She was threatened with legal action by France's National Front party after her show in Paris featured a swastika imposed onto the face of a French politician.


The singer argued all images had been chosen "purposefully" and it was about how people are quick to judge others.


She cancelled dates in Australia in July, which would have been her first tour there in 20 years. Madonna didn't give a reason for this.