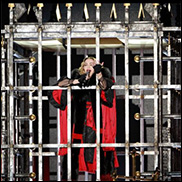 MANILA (CelebrityAccess) — The last week in February found pop star Madonna in wrapped in the Philippine flag during her concert in Manila.


The infuriated Philippines who found dressing in their flag disrespectful has asked organizers to be more diligent and avoid any future situations like that in the future according to AFP.


Press reported that the audience loved the stint and clapped in approval of the pop star during her “Rebel Heart” tour, Filipino authorities were not impressed.


"Our flag law is strict as we want to instill respect for the Philippine flag," presidential spokesman Herminio Coloma said in a statement.


"This should he made clear to organizers and performers in concerts so that there will be no repetition of the incident."


Coloma said in an earlier statement to AFP that the government was "keen" on banning the Queen of Pop from performing in the Philippines because of the controversy.


However, Coloma later said the government did not want to ban her, and that he had been misinterpreted.


A 1998 law prescribes a one-year jail term, as well as a token fine, for wearing the Philippine flag "in whole or in part as a costume or uniform".


The flag issue was second to Madonna's controversial arrival to the Catholic Asian nation.


A Catholic bishop last week called on the faithful to stay away from Madonna's sexually charged concerts, which often encompass religious themes, calling them the devil's work according to AFP.


"Pinoys (Filipinos) and all God-loving people should avoid sin and occasions of sin," Archbishop Ramon Arguelles said in a statement posted on the Catholic Bishops Conference of the Philippines' official website.


Arguelles said the concerts, Madonna's first in the Philippines, were "subtle attacks of the evil one".


During her Manila shows Madonna was herself. She has always been less than dressed, pushing limits and shocking sexually.


Tweets and photos showed the other side of Madonna, while in Manila she visited children at a Manila orphanage run by nuns.


Madonna is now touring in Singapore and has not yet commented on the Filipino flag fury.