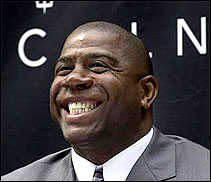 Johnson also noted that he doesn't anticipate their being a new franchise.

"I think it would probably have to be an existing team because I don't think the NFL wants to expand," Johnson added. "I'm sure some teams out there would be willing to move here."

The list of NFL teams considered as likely candidates to be wooed to Los Angeles include The Buffalo Bills, Jacksonville Jaguars, Minnesota Vikings, Oakland Raiders, St. Louis Rams (formerly the Los Angeles Rams) and the San Francisco 49ers. Earlier this week, the Vikings reported that they have been contacted by both AEG and their rivals in the football venture, real estate mogul Ed Roski.

The Chargers were also rumored to have been contacted by AEG about the purchase of a 35% stake in the team, but a lawyer for the Chargers has gone on record, stating that there is no truth to this rumor. – CelebrityAccess Staff Writers