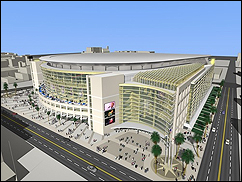 ORLANDO (CelebrityAccess MediaWire) — The city of Orlando and the NBA’s Orlando Magic reached a deal for a new arena that protects taxpayers, and gives the team majority control over construction of the $480 million building.

According to the Orlando Sentinel, the deal keeps ownership of a new 18,500-capacity events center in the city’s hands and locks in the team’s promise to cover any cost overruns. Team officials, however, will be allowed to pick the architect and construction team, as long as the Magic bi out the projects in the same public way that a local government would be required to do.

The team will also received full concession revenues from basketball games, which it currently shares. In return, the Magic will give the city a greater share of advertising, naming-rights and luxury-suite sales to the city in the form of guaranteed annual payments.

The city looks to collect about $500,000 more in annual revenue than the current deal calls for at the newly named Amway Arena.

“It’s very fair and balanced for the residents of the city and the Orlando Magic,” Mayor Buddy Dyer told the paper. “That was extremely important to us that when we operate this, we operate it in a fiscally responsible way.”

The team is expected to sign a 25-year lease with a five-year option after that. –by CelebrityAccess Staff Writers