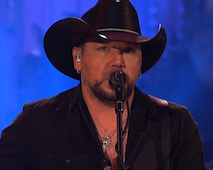 TUPELO, Miss (CelebrityAccess) — For the second time in less than a month gunshots disrupted the party at a Jason Aldean concert. Those inside the BancorpSouth Arena in Tupelo, Miss. were kept inside while police investigated a shooting that left one man hospitalized.

The victim remains unidentified, but WTVA-TV in Tupelo reports that he was released from a medical center on Saturday morning. The alleged gunman is 22-year-old Steven Michael Hulbert of Walls, Miss. is charged with aggravated assault.

The Associated Press stated that the gunfire started at about 11:13PM on Friday night. Witnesses say the shooting started after an argument broke out among a small group of men. Hulbert is said to have pulled out a pistol and fired four to six shots, striking the victim and several vehicles in the arena parking lot.

BancorpSouth Arena director Todd Hunt tells WTVA that once staff heard the shots they directed those leaving the building to remain inside. It’s not clear how long the semi-lockdown remained in place. Enhanced police was already at the venue.

The incident happened one night after Aldean played his first outdoor show since the Oct. 1 shooting in Las Vegas that killed 58 fans. “I’ll be damned if I’m going to let anyone scare me,” he told the crowd, according to The New Orleans Times-Picayune. The newspaper describes the concert as “outstanding.”

Aldean cancelled one weekend's worth of concerts after the Route 91 Harvest Festival shooting, returning to the stage in Tulsa, Okla. on Oct. 12. He's continued to sing Tom Petty's "I Won't Back Down" during live shows after performing the song on Saturday Night Live on Oct. 7. All proceeds from the sale of his version of the song are going to victim funds.