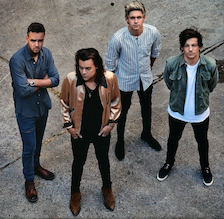 BILLBOARD (CelebrityAccess) — As Niall Horan debuts atop the Billboard 200 albums chart dated Nov. 11 with his first solo album, 'Flicker', he brings the total of One Direction members with solo No. 1s to three. In doing so, One Direction now matches The Beatles as the only groups to see three of its members top the Billboard 200 with solo albums.

Horan follows fellow One Direction member Harry Styles (with his self-titled debut earlier in 2017) and former group member Zayn (with his debut album, Mind of Mine, in 2016).

The Beatles spun off multiple solo No. 1s from George Harrison (two No. 1s), John Lennon (three No. 1s) and Paul McCartney (six No. 1s, including efforts alongside his band Wings).

The only member of The Beatles without a solo No. 1 album is Ringo Starr, who has so far peaked at No. 2 (with his Ringo album in 1973).

There are still two members of One Direction yet to release a solo album: Liam Payne and Louis Tomlinson. Both have charted songs in the past year, including a No. 1 on the Pop Songs airplay chart for Payne ("Strip That Down," featuring Quavo) and a No. 7 hit on the Hot Dance/Electronic Songs chart for Tomlinson ("Just Hold On," with Steve Aoki).