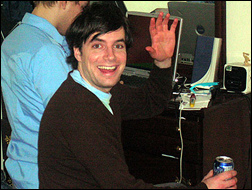 ST. LOUIS (CelebrityAccess MediaWire) — A Nov. 9 show by Mash-up master Gregg Gillis, AKA Girl talk at Washington University's Gargoyle Club in St. Louis came to an ugly end when a man disrupting the event was tased by campus security personnel.

According to reports, a 22-year-old male student was ejected from the club for being disruptive during the show. In response, he removed his garments and allegedly shoved a security guard – cue the police.

Police officers responding instructed the man to put his knickers back on or face arrest. Perhaps disinclined to grapple with the sweaty, naked, seemingly intoxicated and uncooperative man, police resorted to the voltage before arresting him. According to the Riverfront Times, a female witness said that "He was Tasered in the ass for a prolonged period of time. It was terrible."

Gillis claims he didn't even notice the incident until it led to the plug being pulled on his performance. Not to worry, a local Greek contingent came to the rescue, offering the DJ a frat house basement to play in.

That show was [better] attended than the real show," Gillis said. "The basement was packed, and there were 200 or 300 people all over the house. There was no shoving, and everyone was having a good time. It was like a classic college scene: No one standing still, people making out with their girlfriends, people shotgunning beers and crowd-surfing, all with the lights on the whole time. I hope someone has video of that show." – CelebrityAccess Staff Writers