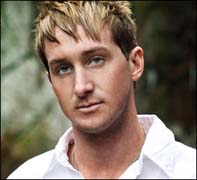 NASHVILLE, TN (CelebrityAccess MediaWire) — Conway Entertainment Group has signed Matt Gary, a country music newcomer who's been making waves on Music Row and country radio. Tony Conway and his staff will rep Gary on an exclusive basis for tour bookings.

Named "Who New To Watch" by CMA Close-up Magazine in 2009, Matt Gary released his debut single entitled "The Days You Live For" and corresponding music video in April 2009 from his own independent label, 17 Music Entertainment. "The Days You Live For" also earned the "DISCovery Award" from music critic Robert K. Oermann in Music Row magazine following the release. In the past year, Matt has graced the pages of Country Weekly's "Listen Up!" and "Who's New" and was featured in Nashville Lifestyles' "Single in the City." Gary is scheduled to release a six-pack (entitled I'm just sayin'/produced by Frank Myers) in the coming weeks.

"Tony Conway has launched newcomers to headliner status," Gary said. "His addition to our team rounds out our game plan to become a contending independent." – CelebrityAccess Staff Writers