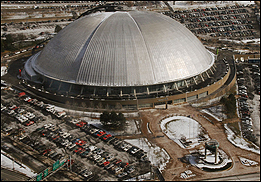 PITTSBURGH, PA (CelebrityAccess MediaWire) — After long service in Pittsburgh, the 17,000 capacity Mellon Arena may be facing its final days. Pittsburgh officials have decided that the arena, which is both the oldest and lowest capacity functioning arena currently hosting an NHL team, is to be slated for demolition instead of being retasked.

Several groups had developed proposals to re-purpose the arena after its current tenants, the Pittsburgh Penguins moved across the street to their new digs, the Consl Energy Center next season. Pittsburgh Mayor Luke Ravenstahl has indicated that he's not supporting any of those plans.

"I believe that there is a better and higher reuse of that land than perhaps preserving that building. Now that may make some folks unhappy but I also think it's the right thing to do for the future of this city," Ravenstahl told the Pittsburgh Post-Gazette.

The only glimmer of hope for the arena is an historic assessment of the arena by the Sports & Exhibition Authority of Pittsburgh and Allegheny County that might see the venue identified as a historically significant site. The recommendation of a consultant retained for this purpose is expected in July 2010.

Originally opened in 1961 after a $22 million dollar build, he venue, originally known as the Civic Arena, has long been a fixture in Pittsburgh. The arena, which featured the world's first retractable roof on a major sports arena saw two expansions; one in 1972 and then in 1992.

Over the course of its life, the arena has played host to numerous events, including concerts by Frank Sinatra, The Rolling Stones, The Beatles, Aerosmith, The Ramones, Kiss, George Michael, Queen, and Garth Brooks, who did six straight sold-out shows there in 1997. The arena has also hosted numerous sporting events, serving as home to the Pittsburgh Penguins, Spirit, Phantoms, Gladiators, Hornets and other sports teams. – CelebrityAccess Staff Writers