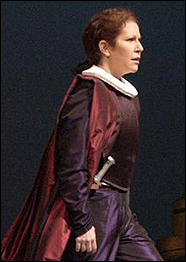 NEW YORK (AP) — Anna Netrebko and Joyce DiDonato will each be a queen at the Metropolitan Opera — but the company can't find anyone to wear a third crown.

Netrebko, opera's sex symbol, will star as Anne Boleyn on the opening night of the 2011-12 season, Met general manager Peter Gelb said. DiDonato is in discussions with the Met to sing Mary Queen of Scots in 2012-13.

The Met has no current plans to stage "Roberto Devereux."

"The problem is casting," Gelb said of that opera's lead soprano role, Queen Elizabeth I. "There's no singer around today who can sing it."

Gelb had discussed with Netrebko having her perform all three queens, but Netrebko decided she would commit to only one at this time.

"I am very excited to be taking on Donizetti's `Anna Bolena,'" Netrebko said in a statement. "Fortunately, it's far enough in the future that I'll have time to learn it really well — the mad scene is even greater than the one in `Lucia di Lammermoor,' and the tragedy is awesome. But I don't get to die in this one: The opera ends just before she gets beheaded!"

The Met, which has favored Mozart, Verdi, Wagner and Strauss, has taken a long time to get around to the queens. "Anna Bolena" premiered at Milan's Teatro Carcano in December 1830 starring Giuditta Pasta, and "Maria Stuarda" opened at Milan's Teatro alla Scala five years later with Maria Malibran in the title role.

Singers who take on these parts in recent years usually are compared with Beverly Sills, who recorded the roles from 1969-72 and sang the Three Queens at the New York City Opera in the 1970s.

DiDonato, a mezzo-soprano, said she will use the version sung by Janet Baker with the English National Opera in the early 1980s. It has Maria as a mezzo and Elisabetta as a soprano — an arrangement used for Malibran's performances.

"People know they're not going to hear a high interpolated E-flat," DiDonato said. "Hopefully, I'm establishing myself in the bel canto tradition. It's going to be different, and I think that's a good thing."

"I had sung Elisabetta in Geneva a couple of years ago and really, really took to this idea of big bel canto, understanding that I wasn't ready for a complete steady diet of it yet, but knowing that this was a direction that I'd be going in," DiDonato said. "I think the preparation that I've been doing and will continue to do in my career with the Handel and the Rossini and the Mozart, in a way I feel like it's leading to this kind of project."