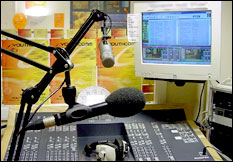 (CelebrityAccess MediaWire) — Major radio stations across the country have been rapidly abandoning modern rock music – so quickly that even some employees don’t even know it before it happens.

Troy Hanson, program director of WZTA in Miami, told the New York Times that he first learned his station’s owner, Clear Channel Communications, had ditched the rock format, and his entire staff, when he tuned to the station one morning in February and heard talk-radio. His rock domain, known as “Zeta,” had vanished completely.

While the R.E.M. anthem may seem appropriate, music executives blame the lack of true stars. Major executives claim that the heralded bands of recent rock movements, including garage rock, like the Strokes and the Vines, or emo, like Dashboard Confessional or Thursday, failed to connect with radio listeners or CD buyers the way previous rock acts did.

The sudden switch of so many marquee stations revived the debate about the health of rock music in general. In the radio industry’s battle to retain listeners in the face of Internet and satellite radio, alternative rock is taking the heaviest fire from executives.

Ratings for rock radio stations have been languishing for years, according to the paper. The share of the 18-to-34 age group tuning in to modern rock stations has shrunk by more than 20-percent in the past five years, while urban and Spanish-language formats have enjoyed expanding audiences.

As a result, rock programs are unsure of what to play.

“The format in the last couple of years has gone through an identity crisis,” Kevin Weatherly, program director of legendary rock station KROQ in Los Angeles, told the Times. “You have stations that are too cool, that move too quickly and are only playing the coolest music, which doesn’t at the end of the day attract enough of the audience. Or you have the other extreme, dumb rock, red-state rock that the cool kids just flat out aren’t into.”

Many blame the rapid growth of satellite radio and digital music players, like Apple Computer’s iPod.

“The people that are leading-edge technology consumers are not being embraced by terrestrial radio,” Jim McGuinn, former program director of WPLY in Philadelphia, told the paper. The station, known as Y100 before Radio One, it’s corporate parent, flipped the station to rap and R&B last February, was the last alternative rock source left in the city.

McGuinn and a handful of former WPLY employees have started an Internet radio station, www.y100rocks.com, to play music they say the terrestrial version had been missing, including songs by bands such as Interpol, Moby, and Queens of the Stone Age.

Some analysts fear that, when radio stations switch from alternative rock to programming aimed at older listeners, they may be making a sacrifice. “Radio has ceded the younger demographic to other media,” Fred Jacobs, president of Jacobs Media, a radio consulting company, told the Times. “I just don’t know how we’re going to get back people who didn’t get into the radio habit in their teens…It really becomes problematic down the road.” –by CelebrityAccess Staff Writers